The Family Vine Winery in Greenville, IL makes this blackberry pizza.  It was awesome, contains whole blackberries and Grandma Jo’s Blackberry Jalapeno Jam, delicious.  They wouldn’t give me the recipe, so I guess we will just have to visit the Family Vine to give it a try, or get some jam and berries and start experimenting.  Wildnerness Farms Blackberry Jams and Juice are a great gift for the holidays.

A few months ago I promised to share this recipe with you.  I already gave you the dumpling recipe, but the magic is in the sauce.  This is a sauce my maternal grandmother, “Grammy”, used on persimmon pudding, but it is delicious over the blackberry dumplings (really, it’s delicious by itself).  I just finished a dumpling smothered in Grammy Sauce and the flavors are still lingering and they are so amazing, I never want to lose that taste.  Enjoy the blackberry dumpling recipe along with the sauce and get your taste of blackberry summer all year with Grandma Jo’s Blackberry Jams.

Mix Bisquick and milk to make a somewhat sticky mixture.  Put mixture into greased coffee mugs (4).  Fold in blackberries equally among the mugs.  Bring a large pot with 1″ of water to boil.  Place mugs into the boiling bath.  Keep slight boil, cook uncovered 10 minutes, cover and cook for another 10 min.  Remove lid and remove mugs from pot.

Mix water and egg yolks and bring to a boil, stir in sugar and flour with a slight boil.  Reduce heat and add butter stirring while it melts.  Add Vanilla extract.

Now spoon your dumplings into a bowl and cover with the Grammy Sauce and serve.  Now I’m hungry all over again.

Take a shot of summer. Fall is here, but you can still get all the flavor and healthy goodness of summer’s best blackberries.  You can now find Wilderness Farms 100% Pure Blackberrry Juice at 50% off.  Use it in recipes, wine making, or just a shot a day in your tea or coffee as a great nutritional supplement to your diet. This special won’t last long so check it out now.

I love to have my greek yogurt for breakfast.  The natural probiotics and healthy protein are a great way to start each day, but the more healthy, plain, greek yogurt does not have the best flavor.  That is where i find use #23 for the Wilderness Farms Blackberry Jalapeno Jam.  I add about a tablespoon to the yogurt and mix it in and for just a few bits of natural sugar, the sweet from the blackberry and the zip from the jalapeno completely override any yogurt flavor.  And along with some nice black coffee the jalapeno has a nice wakening effect.  Send me a recipe or just another use for this great tasting jam and you could win some this week. 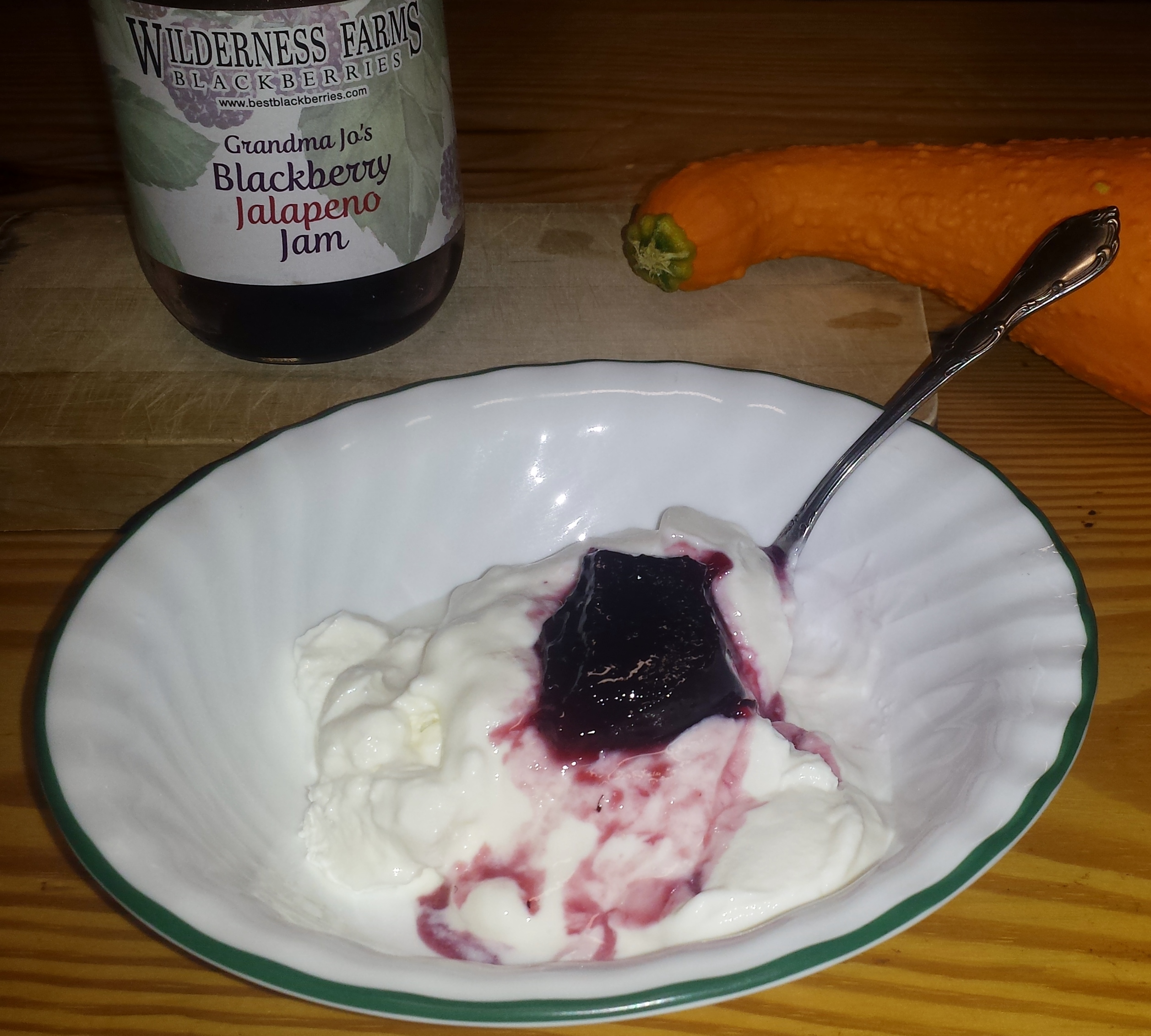 Stephanie Ross won this week’s Wilderness Farms Blackberry Recipe Contest with her entry for Blackberry Pie.  I am not much of a pastry chef, so I let Grandma Jo use this recipe to bake a delicious blackberry pie.  I happened to call up as  Merrell and Jo were finishing the last two pieces and heard nothing but nummy sounds.  Bake up and enjoy this recipe.

Mix ingredients with the blackberries last to insure a consistent mixture.

I would like to introduce our blackberry recipe contest.  Sign up to receive our specials and seasonal updates and then send me your recipe.  I will pick my favorite each week and send the winner a pint of their choice from Grandma Jo’s Blackberry Jam collection.   This is a great chance to share your awesome recipes, keep informed about Best Blackberries news and specials, and a chance at winning some great jam.  So check back each Wednesday to see if your are the winner.  Good Luck!

Gonna start off our recipe contest with a very simple but delicious, tasty snack recipe.  You will need your favorite cracker, I like original Ritz, some soft cream cheese, and some Grandma Jo’s Blackberry Jalapeno Jam.  Spread a thin layer of cream cheese on the cracker, then drop about half a teaspoon of the blackberry jalapeno jam on top.   This makes a nice snack or even desert, light and delicate with tiniest bit of hot flavor mixed with the sweet blackberry taste.  Top this recipe and win a pint of your choice of Grandma Jo’s Blackberry Jams.  To enter our contest click here and then send me your recipe.